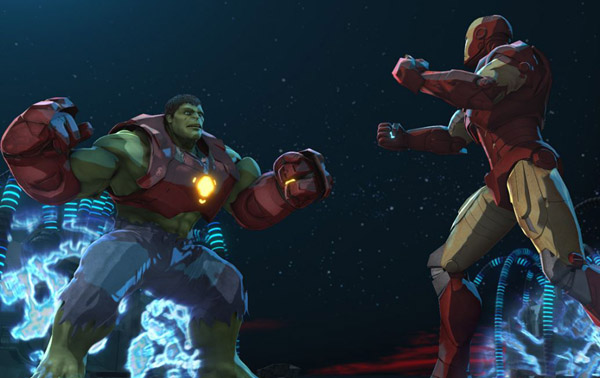 Marvel has made another animated direct to DVD movie, this time a cgi team-up with their two biggest sells, well the ones they still have the movie rights to anyway. Simply put it is horrible. Easily the worst piece of Marvel animation in the last ten years, only surpassed by the late 90s cartoons when Marvel went into bankruptcy and when Reed Richards defeated Magneto with a wooden gun. So let’s see why it’s so terrible.

The plot is that two Hydra scientists want to make the ultimate power source by making a large Stark arc reactor in a dam and using Hulk and the Abomination to charge it was their Gamma energy. That fails and the Hulk villan Zzzax is born, an energy creature that lives to absorb electricity. It possesses robots and Iron Man shows up to help in his own personal Helicarrier. They destroy the robots, think Zzzax is dead, Zzzax takes over the Helicarrier and uses it to try and absorb all the electricity in the state. That is the entire plot.

This is an hour and ten minute long movie with a plot so thin it could barely fill a twenty minute cartoon episode. There’s a lot of padding leading to lots of repetitive fight scenes. There’s even a fight scene in a grave yard with Wendigos which was so out of place and random they might as well have been big lipped alligators.

The animation is just abysmal. Everything looks cheap and it’s even cheaper the more you know about cgi animation. The current cgi cartoons like Green Lantern or Beware the Batman look better and are better animated than this. There were only ten characters in this, one of which was the Jarvis AI and the mandroids, the Wendigos, and other robots animated. That’s only ten models the animators had to make and rig for an animated movie. There’s a point where Zzzax tries to possess the Iron Man armours Tony has on his Helicarrier and the only one he can get is an older MK2. Why that one? Well it’s just his current armour but coloured grey. So they didn’t have to do an extra animation rig for it. This is also why Tony has a Helicarrier rather than using SHIELD in this, because they’d have to make a lot of models for SHIELD agents and spend money and time animating them.

That Helicarrier has one of the unintentionally hilarious moments in the film, though. They have to take it down to stop Zzzax and they completely forget it’s above the dam till Iron Man takes out the turbines. So it’s about to crash and then Hulk jumps into one of the turbines and the ship magically does a 90 degree turn in a second, somehow. There’s no explanation, no justification, nothing. Hulk just turns the ship. We don’t even get to see the ship about to crash or avoiding the damn. We just get a little holo-display of the whole thing like they couldn’t afford some dramatic shots of it about to crash into the dam and then some tension building moments of “will the Hulk be able to do it in time” because that would’ve approached competence. Its two seconds of pointlessness because no one working on this had any idea of what tension was. There’s a lot more awful moments in this but going through them would take a long time and it doesn’t deserve that time or effort put into mocking it.

There’s this mid-2000s tie-in video game feel to all of it. The way the plot moves from fight scene to fight scene almost feels like going through game levels. There’s the random encounter with the Wendigos to pad out play time. There’s the Zzzax final boss fight that I’m sure I’ve played in a Spider-Man game against Electro. It’s all very linear with the same back and forth banter between the two leads that gets repetitive and boring after a while.

The thing that’s meant to hold up the movie, the thing that primarily got the movie made, was the banter between Hulk and Iron Man that was popular in the Avengers movie. Except the thing that was popular was the interplay between Bruce and Tony as well as the chemistry of Robert Downey Jr. and Mark Ruffalo, none of which are in this film. Hulk and Iron Man talking is different than Bruce and Tony and it just doesn’t work. Here Iron Man just goes “the Hulk’s a dumb brute I have to baby sit” and then the banter turns into bickering because it’s not the two people who respect each other and are on the same level from the Avengers.

That’s what this movie was, bickering for an hour. With terrible dialogue too. Some of it was so painful I stopped the video just to take a moment to comprehend that multiple people were paid to write it and more were paid to approve it. That somehow, even with all the success and acclaim Marvel has been getting recently, everyone signed off on this as a product to sell to people. It’s cheap, nasty, and all together horrible. Do not buy. Buying only encourages them to make even more awful products because if it makes money then why bother with the time and effort of a good product when lazy, poor, boring, dreadful pieces of slop will do just fine.

I'm Reaf. I run the Reaf Debrief. I'm from England so I spell things with a U and a sarcastic sense of humour.
View all posts by Reaf »